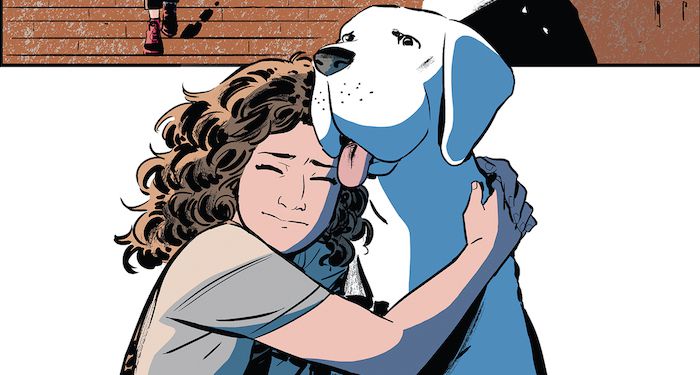 Who is DC’s New Superhero, Whistle?

On September 7, DC published a new YA graphic novel, Whistle: A New Gotham City Hero, by E. Lockhart and Manuel Preitano. Willow Zimmerman is a 16-year-old Gotham student/activist with a mane full of unruly, curly brown hair, a love of Reubens and the neighborhood deli, and a stray dog that she’s taken under her wing that she’s named Lebowitz…after none other than the great Fran Lebowitz. (I would love to know what she thinks of this, tbh).

Willow lives with her mother, who is living with cancer and swamped with medical debt. We soon find out that she is likely stopping her treatment because it’s not working and is only putting them in more debt. Willow takes a night job at the shelter to earn some money, but then finds a puzzle box with a riddle inside that reconnects with her mom’s old friend E. Nigma. He’d been wanting to reconcile with her mom, but thought he’d reconnect with Willow first. He offers her a job working for him as part of his team, doing some…not quite legal things, but allowing her to earn plenty of money — more money than she could ever make at the shelter. This allows her to get her and her mom health insurance, pay down bills, make healthy food for her mom, and ease some family stress. But the double life starts to wear on Willow, her friends tell her she’s changed, and she often has second thoughts about what she’s doing. When an unfortunate incident gives her some canine powers, like supersonic hearing and sense of smell, she decides to use her powers for good — and becomes the superhero known as Whistle.

But there’s more: Willow is also Jewish. Unabashedly, unapologetically, Jewish. We’ve seen other Jewish DC characters, like Kate Kane and Harley Quinn, and then there’s the Bombshells series, which has Judaism consistently woven through it. (Although I’d be remiss if I didn’t mention some uncomfortable questions about stereotypes and tropes that have come up with Harley). But while their Judaism wasn’t always obvious from the start, Willow’s is.

She proudly tells her new friend (and hopefully more-than-a-friend) Garfield about the history of Down River, her neighborhood, and how it used to be an all-Jewish ‘hood with more than 500 synagogues. She explains that her mom is a professor of Jewish culture and history, so she’s full of random facts. Hebrew and Yiddish words are sprinkled throughout the story — her mom calls her “bubbeleh,” and talks about mitzvahs (good deeds) and about the Judaism-specific classes she’s teaching. These all feel like a natural extension of the characters. They’re not token mentions or awkward additions; they are consistently placed and fit seamlessly into the story.

But a thread that runs through the book that isn’t named until more than three-quarters of the way through is the Jewish concept of tikkun olam. Tikkun olam is a phrase that is usually translated as repairing the world, often in a social justice sense. This encapsulates Willow. She has a deep love for her city, and even in the midst of the city crumbling and being run-down and all of its troubles, she never gives up on it and always works to make it a better place, even before she became Whistle. She marches, volunteers, gets involved in causes — and being Whistle allows her to take it to another level, fighting those who want to destroy the landmarks of the neighborhood and the gritty glory of the city.

The fact that the book was released during Rosh Hashanah, the Jewish New Year and one of the High Holidays, feels significant. We celebrate and wish for a sweet new year, but it’s also the start of ten days of introspection and taking stock of our lives before Yom Kippur, when the Books of Life and Death are said to be sealed. In this graphic novel, Willow is continuously introspective; she grapples with her guilt about working with E. Nigma and wonders if her trade-offs are worth it — and also helps save parts of the city she loves and saves people she cares about.

Why is Willow/Whistle so important?

What Lockhart’s words and Preitano’s illustrations do so well is make Willow a fully fleshed-out person. We see her family life, her crush, her insecurities, her soft side and strong side, her doubts and skepticism, and the deep love she has for others. The reader wonders about her decision-making at times and maybe even has mixed feelings about her. She’s not just a kickass superhero; she’s a super interesting teenager. And for as much as we get in this graphic novel, we want to know even more.

Representation matters, and although comic books have a long Jewish history, their Jewishness was largely hinted at for many decades. But like Kate Kane’s identity as a proud lesbian Jew, Willow lives her Jewishness. She turns to Jewish values and traditions when she’s uncertain or needing comfort. It reads like it’s woven into her very being. At a time when antisemitism is surging again, this Jewish teen superhero is just what we needed.