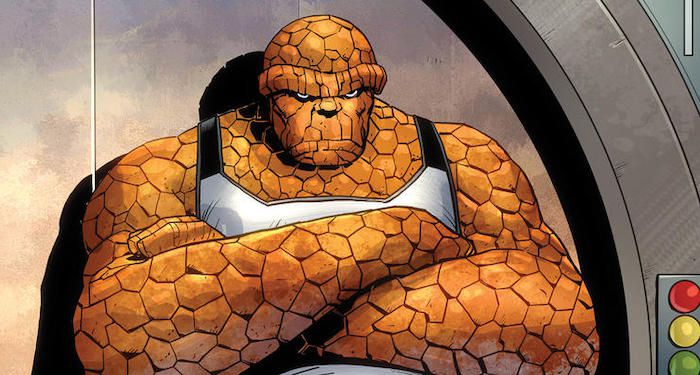 Who is The Thing? A History of One of Marvel’s Oldest Heroes


One of the very first superhero movies I ever watched was the 2005 Fantastic Four. I’ve become a huge Marvel fan since then, but Mr. Fantastic, The Invisible Woman, The Human Torch, and The Thing will always have a special place in my heart. With a new movie coming sometime in the near future, my interest for the crime-fighting group has rekindled. But I did notice that I know a lot less about one-fourth of the crime-fighting group in particular. So, I decided to take a deep dive into the comic version of The Thing.

The Thing is a pretty popular character with a very long history. He’s been around for almost 60 years — when Stan Lee and Jack Kirby created their first Marvel comic, the famous Fantastic Four no. 1. He had a long run with his new family, plus some solo volumes and the Marvel 2-in-One, where he teamed up with other beloved superheroes. But who, exactly, is The Thing?

Who Is The Thing?

The Thing is the superhero name adopted by Benjamin Grimm after he was exposed to radiation and his body mutated to give him rock-like skin. His Marvel profile calls him, “one of the most powerful individuals on the planet, perhaps second only to the Hulk.” Plus, he’s one of the founding members of the Fantastic Four.

So What’s His Story?

Buckle up, because as one of the oldest Marvel’s heroes, The Thing has quite a history. The comics revealed more of his backstory later on through flashbacks. But for ease of understanding, I’ll talk about it here in a linear way. I’ll also stick to his story in Earth-616 — Marvel’s main multiverse world-slash-timeline.

Ben Grimm was born to Jewish parents Daniel and Elsie Grimm in Yancey Street, New York. He also had an older brother named Daniel Jr., who was the head of the Yancey Street Gang. Ben’s parents died when he was young, as did his brother. Now an orphan, Ben became the new leader of his brother’s gang — and he went to live with his uncle Jacob. His uncle taught him that he could live without violence, so Ben left the gang and started attending school. There, he began playing football.

With the help of a college football scholarship, Ben got into Empire State University, where he quickly became friends with Reed Richards and Victor Von Doom. They parted ways after college, and he joined the Air Force to fulfill his dream of becoming a pilot. Ben even worked for NASA for a brief time!

Years later, he met Richards again. Turns out, Ben had promised in college that one day he would fly Reed’s spaceship. So Richards held him to his word. Reed, Sue Storm, and her brother Johnny asked Ben to help them commandeer a spaceship in an unsanctioned effort to beat Russia to space. You know, because in the ‘60s the Space Race was still going on.

How The Thing Got His Powers

Thanks to a stroke of bad luck, the foursome were exposed to cosmic rays when they were out in space. The radiation altered their DNA and gave them powers. Ben was very unhappy with the cards he was dealt with. He thought he was a monster because of his appearance — and in an act of self-contempt he named himself The Thing.

For a long time Ben wanted Reed to find him an antidote, and there have been several occasions in which he has switched back to his human form. But it never lasts, he always chooses to go back to being The Thing.

What Are His Skills?

The Thing’s most notable characteristic is his orange, rock-like skin. His power has made him one of the strongest individuals on the planet, and his new skin protects him from extreme climate conditions as well as explosives. So his physical strength and durability are his biggest — well — strengths! Plus, he’s basically immortal— his body doesn’t age when he’s The Thing.

Has Anyone Else Been The Thing?

Actually, yes! There have been two other people who have gained The Thing’s powers. The first one is the one and only Rogue. She once kissed Ben, absorbing his powers and becoming a female Thing. The second one is Sharon Ventura, who was once known as Ms. Marvel. Sharon was also exposed to cosmic rays, which made her into the She-Thing.

What’s Next for The Thing?

In 2015, the Fantastic Four series came to an end after 600+ issues. But the heroes were given a fresh start in 2018, with the new Fantastic Four (2018) series. Those comics are still being published — issue #36 dropped September 2021. In this series we finally see The Thing marrying the love of his life, plus another epic fight with the Hulk — among other things that I won’t spoil.

And like I mentioned before, the Fantastic Four are finally making their appearance in the MCU. Not much has been released about the film, but we can expect to see The Thing on the big screen in the next few years.

So Ben “The Thing” Grimes is not going anywhere anytime soon.

Be sure to check out our Marvel archives for more character profiles, quizzes, recommendations, and so much more!