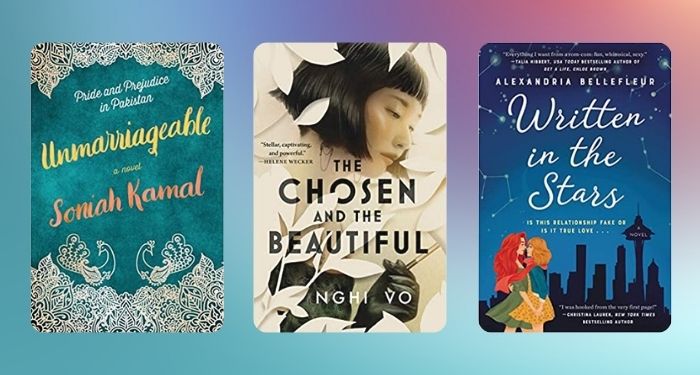 With just a handful of exceptions, I have always had a lot of trouble with classics. I did read them, especially as a teenager, because I thought that’s what you had to read to be a “proper” book person (and because that’s what was assigned in school). But I can easily count the very few that actually captured my attention while reading, let alone stuck with me after turning the final page. And thinking back, it’s no wonder! How much could I, a disabled queer Asian American woman, get out of reading old books written mostly by dead white guys about even more white guys, really? Our worlds are just so vastly different, it becomes quite the undertaking trying to find pieces of those books that resonate with my own life.

From Shakespeare to Twain, The Canterbury Tales to Gatsby, my syllabi throughout school were inundated with white men (and the occasional white woman) from long ago. It wasn’t explicit, but the message this sent rang loud and clear in my mind. “True” literature was not a place for me to see myself, but a place for me to see an extremely narrow view that the powers that be had decided was all I needed to see. And for the longest time, I simply accepted that as fact.

One classic that I have always loved is Pride and Prejudice. But in spite of my love for it, it was still a story that took place in a world completely different from mine, a world that seemed to me as unrealistic and fantastical as the ones in books about dragons and magic. It wouldn’t be until I was an adult that I began to realize that reading didn’t always have to be a trip to a new world (as much as I did enjoy that), and that recognizing elements of life I actually experienced myself could be a major part of it, too.

My first foray into retellings was actually not a book at all, but the movie Clueless. The revelation that this ’90s movie was a loose reimagining of Emma blew my preteen mind to pieces. And I know what you’re thinking: exactly where in Clueless am I seeing myself? The answer is nowhere, at least not exactly. But it does take place in Los Angeles, the city where I was born and have lived nearly my entire life. The epiphany was that it was possible to recognize anything in these classic stories, even if that anything is as small as the mall Cher and her friends go shopping or the stretch of freeway they accidentally drive onto.

Once I realized this, I became (and continue to be) a glutton for retellings. And especially diverse retellings of my beloved Pride and Prejudice. I love being able to see how authors who are people of color or queer mold this story from 19th century England into one that allows them to be front and center. It can be turned into a Muslim story about Pakistani society (Unmarriageable by Soniah Kamal), a lesbian fake dating story (Written in the Stars by Alexandria Bellefleur), an Afro-Latinx story about gentrification (Pride by Ibi Zoboi), and the possibilities go on and on. There is an incredible power in seeing oneself in stories that are held in such high regard, stories in which we’d long been told we didn’t belong.

I would say, though, that the existence of these diverse retellings could arguably be even more important for those who aren’t marginalized to read. One of the foundational facets of reading is as an exercise in empathy. And while those of us who belong to marginalized communities have been doing these exercises all our lives, the people those original classics are about simply have not stretched those muscles nearly enough. And if using familiar stories leads more of those people to books that will teach them about our histories and lives, I say let’s give them as many as we can! More retellings like Chloe Gong’s These Violent Delights, which weaves Romeo and Juliet into the politics and debauchery of 1920s Shanghai. More like Nghi Vo’s The Chosen and the Beautiful, a Gatsby retelling centered on a queer Vietnamese adoptee navigating American society in the Jazz Age. And yet others like S.A. Chant’s Peter Darling, which reimagines Peter Pan as a trans man returning to Neverland as an adult. These retellings all feature recognizable characters and narratives to illustrate that these stories can belong to anyone, anywhere. And maybe that will help people to see us for who we are: whole people with full lives who aren’t actually as different as they seem to want to believe we are.

Need some help getting started (or continuing) on your own journey to see more of the richness of the world through retellings? You can explore these queer retellings of classics and fairytales, or these diverse YA classic retellings.