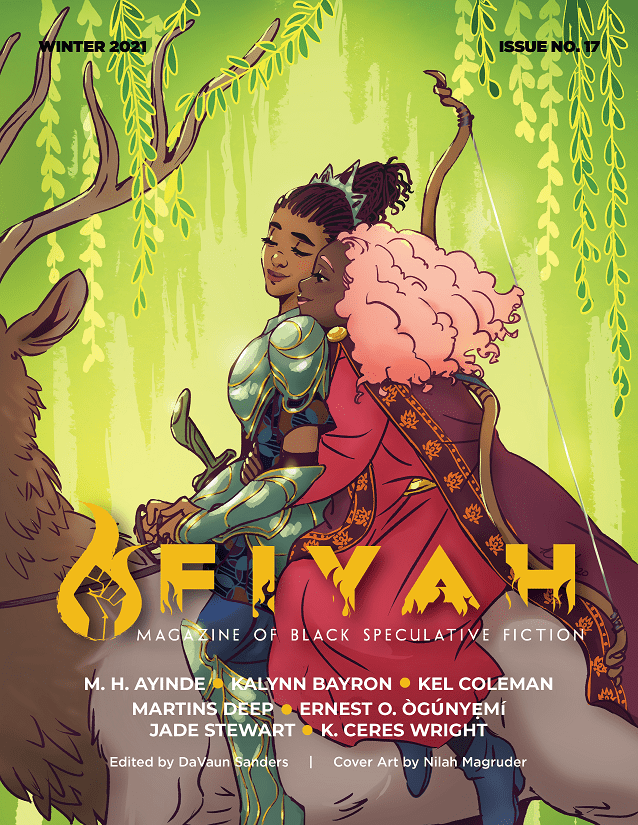 
Finding excellent short SFF can often feel like hunting for buried treasure. Sometimes it takes a guide to help fill in the map, connecting readers with fantastic fiction and showing where X Marks The Story–a monthly column from Charles Payseur.

(And yes, this is no longer January–but the stories are still great and worth it!)

Hi there! Ready to X-plore the X-citing world of short speculative fiction once again? To go to X-tremes to find great stories with me, your X-pert guide? Ready for me to stop using more X-tra Xs than a 90s X-Men crossover? Tough! Err, I mean, tough for the last one, because I’m not stopping. For everything else, you’re in luck! Because today I want to introduce you to a number of recently published stories. From science fiction to fantasy to horror, there’s hopefully something for everything to enjoy, so grab a snack and stay hydrated as we embark on this X-quisite literary adventure!

What It Is: If you haven’t gotten around yet to checking out Baffling Magazine, this story, which drops in the January issue (the publication’s second release) will hopefully make you reconsider. The narrator is the lover of a warlock, a demon with something of an insecurity problem and a nocturnal habit of participating in hot dog eating competitions via astral projection. It’s exactly the kind of quirky that I appreciate, and yet the story is much more serious and emotional than the premise might imply, revealing a careful and wonderfully complicated relationship and characters who are far from perfect but who might just manage to be good for each other.

Why I Love It: I love the relationship that is revealed here in all its layers and strangeness and dramas great and small. The narrator is so interesting, a demon who struggles with his sense of self-worth, who is making strides in what he does but who is also ashamed about it in many ways, aware that he’s viewed by his boyfriend’s family as a failure, as the titular deadbeat. And that boyfriend, a warlock, who seems both supportive and not, rounds out their dynamic so nicely. The story follows their messy situation in a great, slice of life style, where the characters feel real and fleshed and complex, all done with a stunning economy of space and through some striking and surprising elements. I laughed at the hotdogs, but there’s something tender and raw and aching under the trappings of magic and horror, and for me it’s a resonating and wonderful read.

What It Is: The narrator of this story went to Mars following a dream of new growth, a fresh start, and they severed their ties with their family to do it. But suppression, imprisonment, mind alterations, and alcoholism have turned them into a shadow of who they were. Depressed. Broken. And now they learn their brother is on the planet, looking for them, and it brings to the surface all the things, the hurts and the hopes and hell they’ve spent the last years trying to drink away. Bleak and messy, the story comes out of the return issue of Apex Magazine, and carries with it the signature grim realities and fragile people one step away from shattering.

Why I Love It: This story hurts, and while for some that might not be a reason to love it, sometimes I crave the kind of emotional annihilation that this story offers. The narrator is an absolute wreck and the story pulls no punches in revealing their pain and the layered wrongs that have been done to them. The hope with which they reached for Mars, the dreams of growing things, and the ways that crushed, their dreams excised from them like their very language, leaving only a shell that once held something lush and alive. The piece plays with hope and despair, with the idea of help and of family, all things that the narrator almost has access to, but for the trauma and the wounds they carry that cannot now be healed. And while it’s bleak and obliterating, it’s also a stunning and beautiful read!

What It Is: Walker is a non-binary demon hunter who doesn’t want membership into an “elite” coven to get in the way of doing what they think is right and going where their feet take them. The story, coming in the latest (unthemed) issue of Fiyah Literary Magazine, follows a day in their life–a day full of demons! From those brought on by self-doubt and despair to those who can pose a threat to a whole city and mop the floor with a team of coven hunters, the story builds a world where demons are as varied as the people dedicated to banishing them.

Why I Love It: There is such an energy to this story, an irrepressible joy that Walker brings to their work. It’s what they want to be doing, how they want to be doing it, and they’ve paid their way in time and skill and perfection. They’ve had to, because they don’t come from much, and they’ve made it through school with everyone wanting there to be a reason to deny them, to fail them, to send them packing or else co-op them into a coven and its “safe” corporate mandates. Instead, Walker wanders, always circling back to the people they love, the family roots that still run deep, but otherwise enjoying the freedom that the life of a hunter affords them. The ability to move, to act uncensored by the whims of a coven. It might mean less fame, less money, but it also means doing things their own way, and it’s really hard to argue with results. The piece is tightly paced, action-packed, and a delightful and charming rollercoaster from beginning to end. I want the book series! I want the television show! It’s so good!

What It Is: It’s not like I’ve never read a retelling of the Orpheus/Eurydice myth, but I’m not sure I’ve ever read one quite like this. Serving up an alternative trajectory, the story imagines what would happen if it was Orpheus to die, and Eurydice who travels into the underworld not to bring him back, but to make sure he has an instrument to play even then. The mechanic of needing to leave Hades without looking back is still there, but the story updates and twists the idea nicely, delivering a take that is very different from the original, though in some ways just as tragic.

Why I Love It: The way this story complicates and twists expectations is just :chef’s kiss:. Aside from the shift in perspective, the way this story deals not with devotion but with doubt is so great. It’s an aspect of the original, Orpheus’ doubt that Eurydice is behind him, but here the story presumably ends happily, only for that to sour and rot. I love the long-game trick that the gods might be engaged in here, the tragedy that Eurydice steps in basically from the moment she leaves her home and resolves to find her dead husband. The piece manages to maintain the path of the story while keeping an entirely different set of themes, and revealing the way that doubt is double-edged, cutting not only into the past of what might have been, but into the future of what might be. It’s a powerful and careful take on a myth that has seen its share of attention in the past few decades, and it manages to do something fresh and interesting with the source material.

What It Is: I’m not sure if this story is “properly” science fiction or fantasy (given the publication I’d lean the former, while the overall feel of the piece hit me a bit more the later, so you’re on your own on that front). What I know is that it follows Quinn, a recently dumped woman who specializes in “Aquid Care and Rehabilitation.” She’s definitely not an exterminator, but she does help people who have problems with the water-like creatures who mysteriously appeared on the shore and have been taken in by people as pets or cheap labor ever since. Only recently one of Quinn’s aquid friends seems to be trying to communicate, and might have something rather momentous to say. Too bad a local rival has just showed up to maybe ruin everything.

Why I Love It: I love the way the story finds in Quinn this bundle of grumpy hurt who can’t really bring herself to show weakness. She’s tough and she’s passionate about what she does, about making sure that aquid’s aren’t being abused, about always being presentable and dapper. But that’s part of the thing, that she always has a mask ready, that she never really feels comfortable letting other people in. Which sort of torpedoed her last relationship despite her still carrying a torch for her ex-girlfriend. And I love how the sudden appearance of a complete jerk of a competitor pushes her to confront a lot of her fears and her hesitations, her regrets and mistakes. While still telling this raucous adventure of bruised egos (and bodies) and the importance of treating all living things (but especially mysterious and very intelligent sea creatures who might have a secret agenda) with care and respect. Just a fabulous read!

I would be utterly remiss in my duties as X enthusiast if I didn’t mention the pair of X-Men formal poems out at Strange Horizons by Stephanie Burt, “Hank McCoy’s Complaint Against the Danger Room” and “Frostina” (a sestina about Emma Frost!).

“10 Steps to a Whole New You” by Tonya Liburd in Fantasy Magazine #63 is also wonderful and deals with monsters and bargains, loneliness and secrets.

GigaNotoSaurus’ January novelette, “A Remembered Kind of Dream” by Rei Rosenquist, is a strange, punk-flavored post-apocalyptic adventure swirling around a group of people with some holes in their memories, and it makes for a trippy and captivating read.

Nightmare’s specially issue #100 has a lot of strong stories, but I think my favorite is Sam J. Miller’s “Darkness Metastatic,” which imagines a kind of viral online toxicity and the chilling implications one journalist uncovers about it.