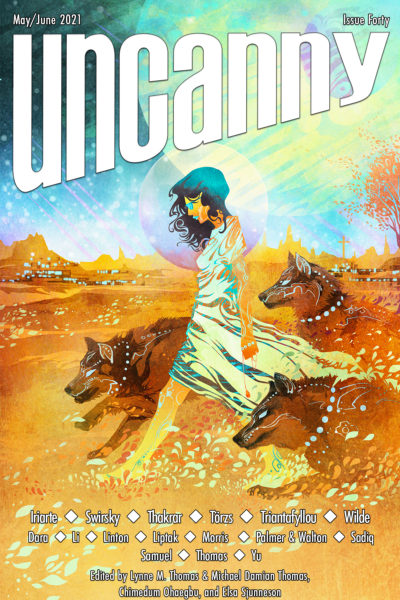 
Finding excellent short SFF can often feel like hunting for buried treasure. Sometimes it takes a guide to help fill in the map, connecting readers with fantastic fiction and showing where X Marks The Story–a monthly column from Charles Payseur.

We’ve officially moved past “early 2021.” And as we get deeper into the meaty part of the year, the short speculative fiction isn’t letting up. At turns delightful and obliterating, it can be difficult to navigate the wide landscape of the field without a guide, without a map. Which is where I come in! Looking for a story that will tug your heartstrings? I know just the route to get there! Prefer something with more action to get your heart pumping and your feet stomping? I can show you where to look! Whatever your tastes, from science fiction to fantasy to a lovely mix of the two, slip on some sensible shoes and let’s get on the trail of some X-cellent short SFF!

What It Is: Astrid is a talented mechanic and inventor. She’s also autistic, and metaphors, however, are something of her nemesis. So when she crafts a literal steel magnolia as a kind of present for her mother, she’s not aware that what she’s doing is actually creating an entirely different kind of metaphor, one that has little to do with the movie and everything to do with Astrid’s feelings about her mother’s cancer. The science fiction comes from what Astrid’s inventions end up doing, and how that plays into the wider lines between the literal and the figurative.

Why I Love It: This is a bittersweet story, one that looks at this raw and emotionally devastating situation and doesn’t flinch. Doesn’t pull away. It captures all of Astrid’s struggles to come to terms with what’s happening, and the ways her autism complicates the process. It does an amazing job of taking what is a very delicate situation, though, and just beautifully exploring it. Showing all the emotion, all the frustration, all the humanity on display as Astrid and her mother talk. As Astrid faces the ways her invention does and doesn’t go to plan. She’s a child yet, and despite a rather mature way of looking at the world the story finds her growing in some important ways, faced with things she’s never had to face. Not breaking. But being changed all the same by the weight and grief of it all. And learning a bit more about herself, and the world, and metaphors. Be sure to have some tissues to hand for this one, because it is an emotional rollercoaster (and so good).

What It Is: Though it wasn’t available online until June, I’m still considering this a May release from Uncanny Magazine, as that’s when the full issue was out. And people, it is another story that aims at the heartstrings and hits its mark. It finds Komal, a young girl who feels ignored except for when she’s being bullied. Desperate for escape, she chases after Faerie magic, only to find that Faerie doesn’t want her. At least, not in the way she thought she wanted. It’s a complex look at loneliness and escape, explored with a careful hand by the author, who understands how easy it might have been to nudge Komal’s story into tragedy but doesn’t. Who finds a different ending instead, one that is beautiful and inspiring and affirming.

Why I Love It: Everything about Komal seems to make her vulnerable. The subject of racist and misogynist harassment. Isolated, without an advocate. A girl who wants to disappear, and who takes risks in part because she knows that she has to in order to maybe find a way out of her situation. On the edge of something deep and grim, what ends up finding her isn’t a darkness but a friend. Not one who can wave away her problems or extract her from the dangers and difficulties of her life. But someone who can for once see her and the good in her. Her power and her potential. And that is a magic that is powerful indeed. One that you don’t need to be a Faerie to understand or practice. And I love how the piece brings Komal to a place where she can hope for something in her own life. Not erasing the very real issues and injustices around her. But recognizing that she has power, and will have more, to shape her place in the world, to connect with people who do see her, and who she can in turn see. It’s a lovely and tender and heartwarming read.

What It Is: In a peopled solar system where travel between planets and moons is common, and where there’s an increasing market for creating artificial body augmentations for a variety of reasons, the arts are seeing something of a transformation. And for a pianist, and for an artisan specializing in flesh, in somatology, the future means pushing the boundaries of what is possible, both with regards to the human body, and how a human body can create art. And what follows is something of a controversy, something of a risk, but also an undertaking that might bring both to new heights in their fields.

Why I Love It: I love the pacing of this story, which might seem strange at first because it is a slow piece, one that unfolds over months as the characters work toward this rather huge project. As they are caught in other things, as they make plans, as they go about their lives. They aren’t consumed by just this single project, but rather are committed to their careers, to their ambitions, leading them to the moment when they can reveal their breakthrough, the fruits for their intense labor, and push the boundaries of their arts forward. I just love the way that it’s understated, showing that this isn’t the work of a moment. Or a day or a week or even a year. That it happens in the flow of things, the constant effort that works within the constraints of making a living, funding their passions. But through all that how they still shine, and how the moments of their success ring loudly, echoing through the solar system, through time, as something new, momentous. For me it’s a careful and fantastically crafted story, subtle but poignant, and very worth checking out!

What It Is: Appearing in the “battle” themed issue of Lackington’s, this story imagines a kind of team sport. One that’s only possible thanks to the fact that in this world some people are have synesthesia that isn’t just about senses but allows them to manifest their altered sensations in physical form. Players of the game then use these powers to try and knock down the opposition using a point system that’s not difficult to follow. Sia can make light from sound, and wield that light as a solid force. A useful power, especially when some dirty pool from the opposing, Chicago team, meaning holding back isn’t an option.

Why I Love It: SFF sports stories aren’t exactly common, and I love the premise here, the rules, and the energy that the game brings to the story, and that the author brings to the game. The setup is classic and for a Chicago-area native, only a little bit of a dig. The big city team versus the local underdogs. Some less than legal play. Some mighty comeuppance. The piece shines thanks in part to the great cast of characters and their unique powers and the ways they weave those together. There is a very visual flare to the work, something that I especially like given the idea of synesthesia, where here reading the words evokes the sounds and smells, the sights and textures and tastes. It’s tightly paced and powerfully rendered, full of determination, drive, and a lot of fun. It really does make me wish this sport existed, because I’d have season tickets. An incredible read!

Looking for even more recommendations? Then good news, because here are some more great stories to X-plore!

If all the X-tra Xs don’t give it away, I’m a bit of a fan of superheroes, and I absolutely loved Jen Brown’s take on a particularly messy and traumatic superhero journey in “To Rise, Blown Open” (Anathema).

Along the same line, you can squint and read “Throw Rug” by Aurelius Raines II (Apex) as something of a superhero story, though it might be closer to say it explores the intersections of confidence, family, and the power of never giving up. Whatever the case, it’s an inspiring read!

Two women with big dreams and an even bigger love find that might not be enough in “Blood in the Thread” by Cheri Kamei (Tor). It’s difficult at times, wrenching, visceral, but also unflinching and reaching for joy and triumph, and it reaches using art, trust, and a refusal to betray the people who really matter.

Meanwhile, in the first issue of The Deadlands, “Peristalsis” by Vajra Chandrasekera looks at a very strange television show, and a very strange fandom—ones that might break the barriers between life and death, between audience and show, between story and reader.

And that’s all for this month! Remember to tune in again next time, for more X-quisite speculative X-periences!