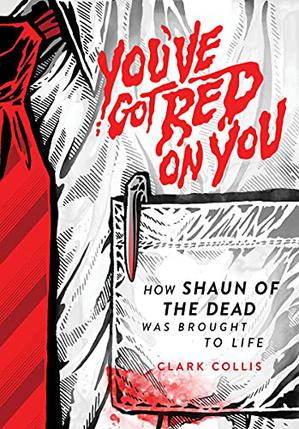 YOU’VE GOT RED ON YOU | Kirkus Reviews


Filmmaker Edgar Wright’s Shaun of the Dead has achieved revered cult status in the years since its 2004 release. This book follows its creative journey, starting with Wright’s love of movies during his childhood in England. This section gives readers an early taste of the films that would influence his work, such as John Landis’ An American Werewolf in London (1981) and Sam Raimi’s Evil Dead II (1987). Wright eventually directed the two-season U.K. comedy series Spaced, which starred its co-creator, Simon Pegg. Inspired by one of the show’s episodes, in which Pegg’s character plays a zombie-themed video game, Wright and the actor wrote an unusual screenplay: a rom-com with zombies. Fascinating, comprehensive interviews with Wright, Pegg, producer Nira Park, Nick Frost (Pegg’s best friend and co-star), and many others provide insight into the film’s production. Wright was pitching a film in a genre whose popularity was waning in Britain, and several box-office bombs forced Shaun’s original production company to shut down. Things hardly improved on set; Wright describes frequent clashes with a more experienced director of photography. Overall, Collis’ book is as entertaining as the movie it spotlights. It’s chock-full of curious tidbits; for example, users of Spaced Out (a Spaced fan site) were recruited as zombie extras, and Wright’s 48-hour binge of the video game “Resident Evil 3” inspired memorable scenes in his movie. There’s also welcome appreciation of Wright and Pegg’s immensely clever script, in which an early, humorous monologue foreshadows the movie’s entire plot. Collis’ tightly organized book includes meticulous details of day-to-day filming, which complement pages of set photos, promotional materials, and, best of all, storyboards sketched by Wright and his older brother Oscar. At the end, the author effectively brings readers up to date on the post-Shaun lives of the cast and crew; Wright, for example, went on to helm the well-regarded action film Baby Driver (2017).