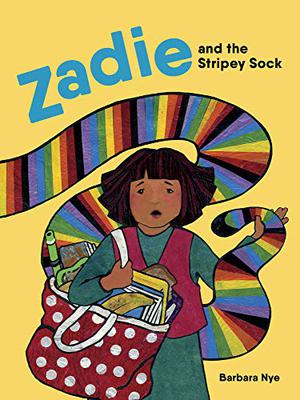 
She packs her bag with her most important possessions, including a snorkel, binoculars, and a piece of toast. Just when she is ready to leave, though, she realizes that she’s missing something: one rainbow stripey sock. Zadie sets off to find it, confronting the family members who made her angry. Jack—who appears to be her brother—hasn’t seen the sock. Maggie—who might be Zadie’s sister—tells Zadie she doesn’t have the sock because “Stripes are not cool.” At one point, she thinks she finds her dog chewing the sock, but when she realizes that the animal is ruining her brother’s shirt and not her sock, she walks away. Dad is too busy working in the garden to help, and Mom is too busy making a phone call. Zadie’s anger builds and builds, and she is more and more sure that running away is the right decision. That is, until she finally finds her younger sibling playing with her sock—and remembers why family isn’t all bad. Although Zadie’s anger is both accessible and refreshing, she does not seem to reflect on how her interactions with family members border on selfish and rude. The third-person narratorial voice deftly balances sincerity and humor. Illustrations depict brown-skinned Zadie’s family as interracial, with a brown-skinned mom and White-presenting dad.